A vibrant city with European finesse, Trikala really lends itself to discovery on two wheels. You are invited quite courteously to “get on your bike”. Afterwards, you might like to follow a breath of exhilaration with a sip of intoxication on the wine routes of Meteora, including wineries that impart some of the secrets of local production. For any sober heads left after this experience, you can take your pick from one of the organized mushroom hunting excursions in the forest. Above all else, delve into the local cuisine by checking out the gastronomy festivals and, of course, trying its dishes in the restaurants of the town.

Built on the Thessaly plain, Trikala is divided down the middle by the river Litheos and the two sides connected by ten one-arched bridges. With tree-lined squares, plenty of pedestrian walkways, cyclists gamboling around its neighbourhoods and the aroma of coffee ever present in the air, this is a city on the move, enlivened by its people and their history. 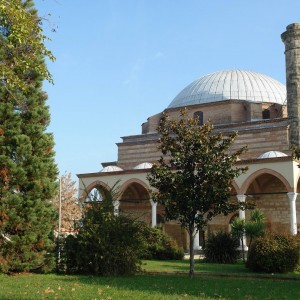 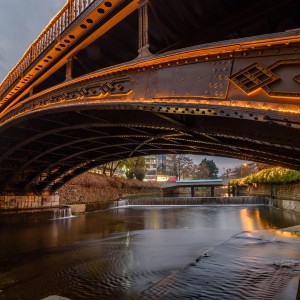 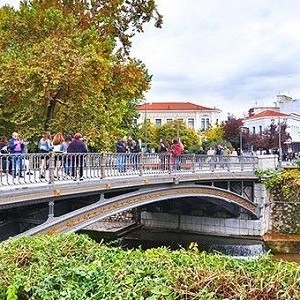 It can be enjoyed on foot or, if you are game, on two wheels, keeping up with the pace to which its own citizens are accustomed. At the French bridge, where the sunlight dances on the waters below, a spectacular show of colours make an inspiring send-off. The walk along the river banks, decorated by plane and wild chestnut trees, will take you to the remains of the city of the 3rd millennium BC, ancient Trikke, where Asclepius lived and worked.

Varousi, the old Christian district, reminds you of the nobility of a more recent era; two-storey stately homes, byzantine churches and a warren of small cobblestone alleyways. These will lead you to the Castle of Justinian, the 17th century clock tower and on to Manavika, the humblest of traditional neighbourhoods, now offering moments of repose and refreshment with its little taverns, bars and cafes. Prophetes Elias, the little verdant hill with the zoo and panoramic view of the city, makes another desirable distraction from your citywide pedal or stroll.

From busy Asklipiou St you will reach Matsopoulos Mill, a collection of industrial buildings that functions now as a centre of culture all year round. However, it becomes the ‘centre of attention’ for all excited youngsters at Christmas when it is transformed into the Mill of the Elves. The pirate ship, Santa’s house, the incredible Fun Park, the ice rink all convey the magic of the festive season to young and old alike.